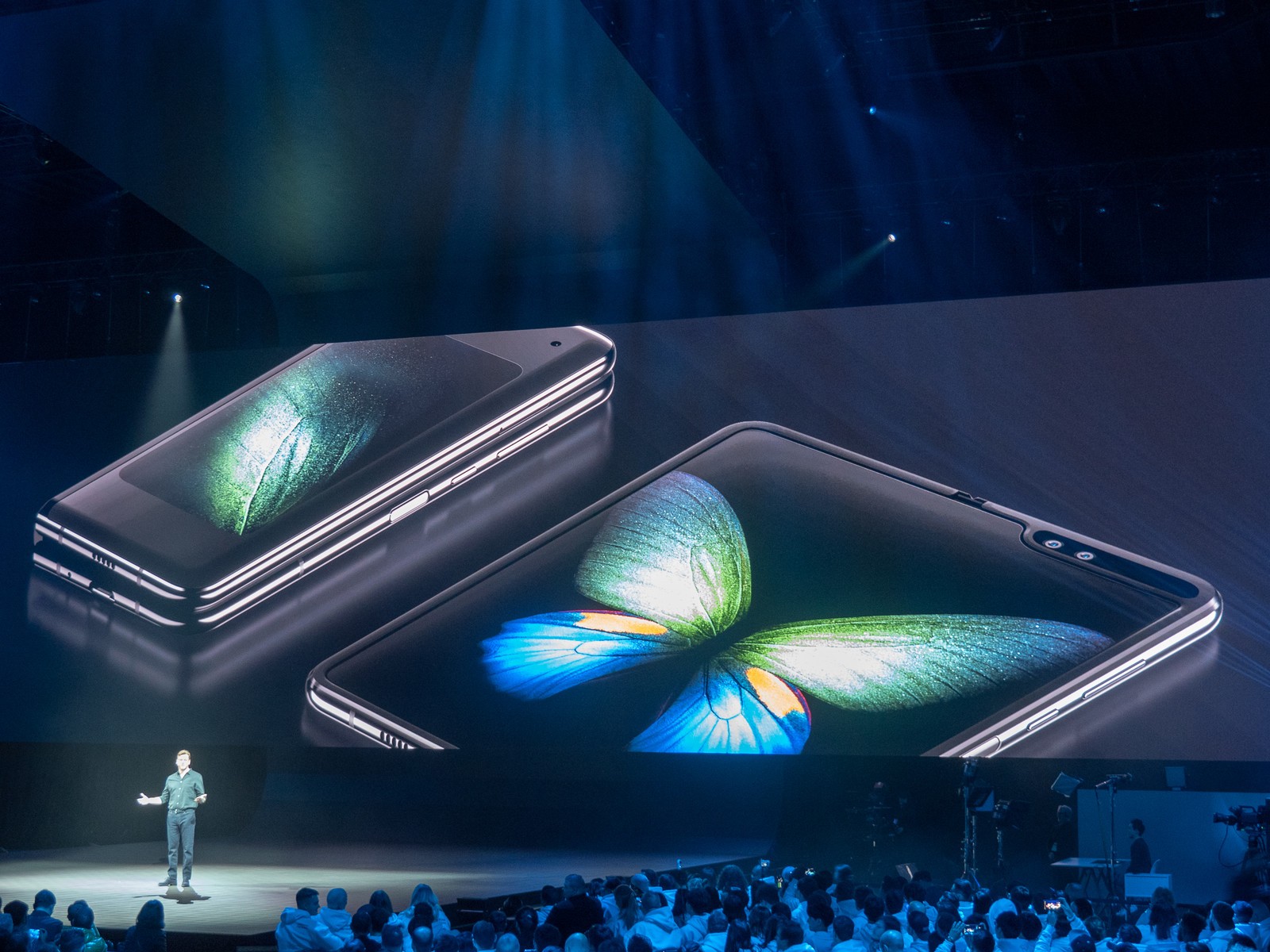 Samsung Just launched its latest line of revolutionary smartphone the Samsung Galaxy Fold. it’s the foldable phone that has been everywhere in leak stories before the launch. the Samsung Galaxy fold is finally here and this is all you need to know about it 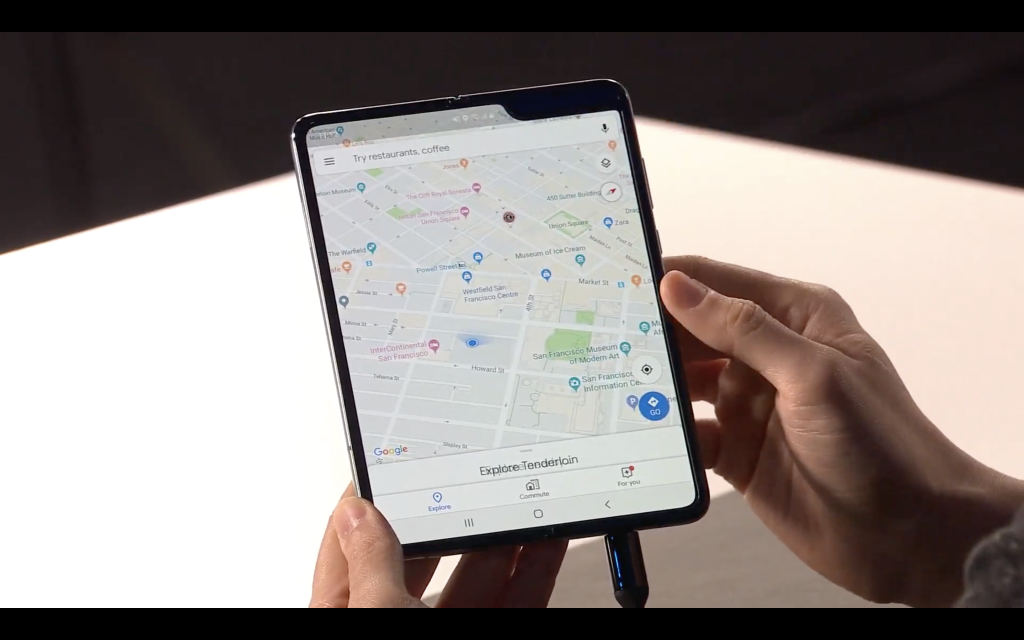 The Galaxy Fold has two displays. The main highlight of the Galaxy Fold is that it has two displays, a 4.7 inch HD+ Super AMOLED display with a 21:9, 1960×840-resolution on the outside of the device and best accessible when the Galaxy fold is closed ad a second massive flexible 7.3 inch large 7.3-inch QXGA+ Dyanic AMOLED canvas with a form factor of 4.2:3 2152×1536-resolution panel which is revealed when you open the phone up.

The outer display is meant to use on the go, with full capability for anything you’d regularly use your phone for, including texting, making calls etc. The spectacle the Samsung Galaxy Fold brings is literally the fold. when you open it up, you get a tablet-like experience in a device you can easily fit in your pocket.

Samsung is especially proud of the hinge technology they were able to develop for the Samsung Galaxy Fold. It’s powerful and secure.

The Samsung Galaxy Fold makes a satisfying click when the device is opened. the hinge is engineered with multiple interlocking gears hidden in an enclosure for a seamless and elegant look.

App Continuity is a clever software feature on the Samsung Galaxy Fold which makes the two screens work seamlessly together. when using the front small screen and you open the phone to the large screen, the display seamlessly shows you whatever page you were on so that you continue working. its one phone with two displays. Let’s say you’re using the Galaxy Fold with its 4.6-inch display to browse Twitter and come across a video you want to watch. If you open the Galaxy Fold to access its larger screen, Twitter will automatically open up right where you left off to tie the whole experience together. 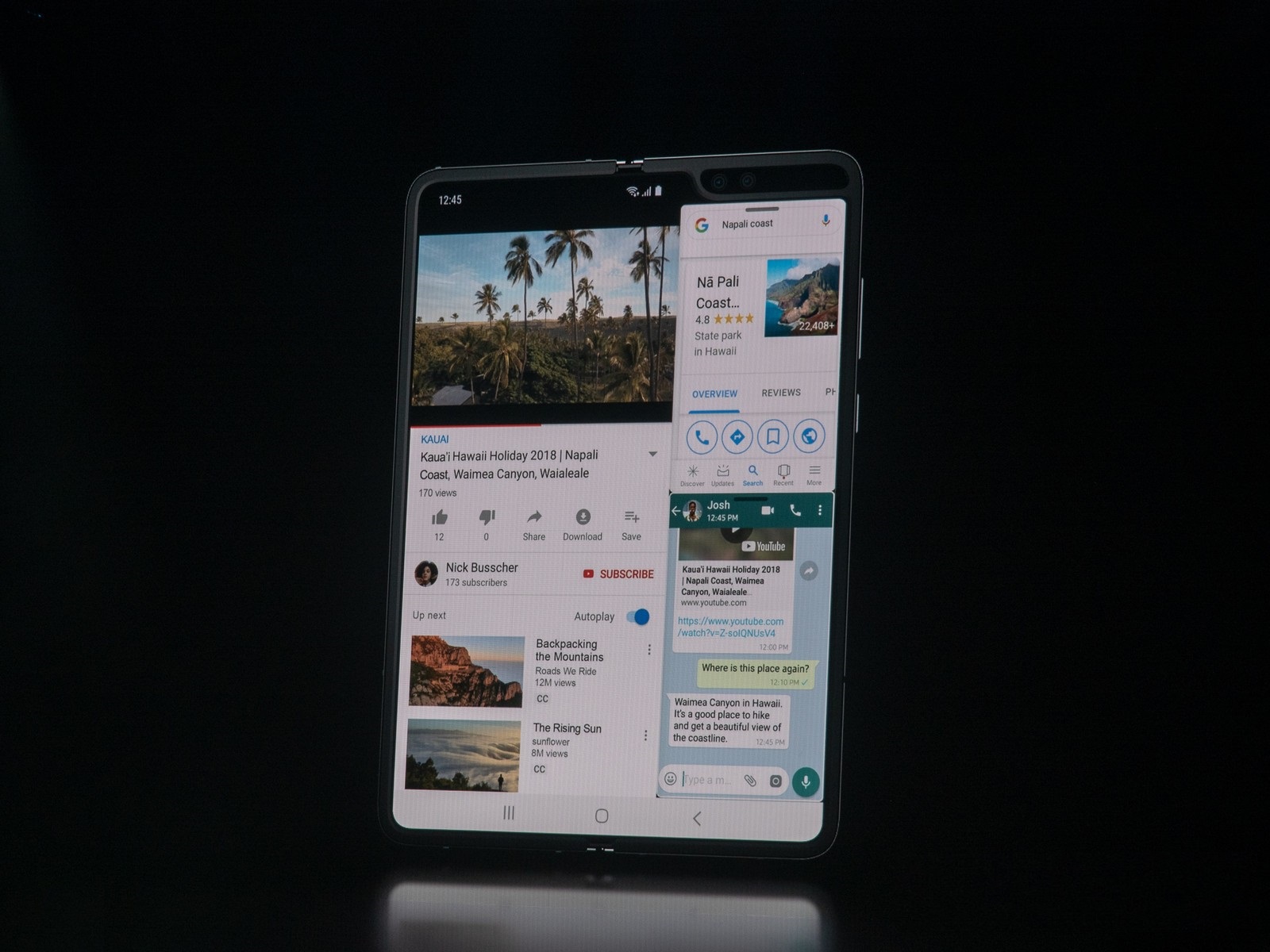 For one thing, when you’re using the Galaxy Fold with its main 7.3-inch display, you can get up to three apps simultaneously at once.

Samsung went all out on this phone even with the cameras. there are up to 6 cameras in total in the Samsung Galaxy fold including two rear cameras, two front infold cameras and one cover camera.

The Samsung Galaxy fold has set a new benchmark on smartphone pricing. it costs nearly $2,000. $1,980 for the base model to be exact.

Samsung is pitching the Galaxy Fold as a “luxury device,” and the specs it shared onstage sound appropriately high-end. The company says the Galaxy Fold runs on a “state-of-the-art 7nm processor”—most likely Qualcomm’s new Snapdragon 855 SoC—and 12GB of RAM. It has 512GB of UFS 3.0 storage, which should allow it to read data quicker than most other handsets.

Powering the multiple displays are two batteries that combine for a 4,300mAh capacity. The Samsung Galaxy Fold is capable of wirelessly charging a second device using reverse wireless charging technology. The phone itself supports WPC and PMA (not Qi) wireless charging, and it works with Qualcomm’s Quick Charge 2.0 standard when powered with a wire.

There’s a fingerprint scanner on the side and stereo speakers as well, and the device is compatible with Samsung’s DeX hardware, which lets it serve as a pseudo-desktop. It will be available in Space Silver, Cosmos Black, Martian Green, and Astro Blue color schemes, and Samsung says you’ll be able to customize the hinge color too.

It runs a special version of Android Pie that Samsung revealed in November 2018.