Glow gets renewed for a fourth season 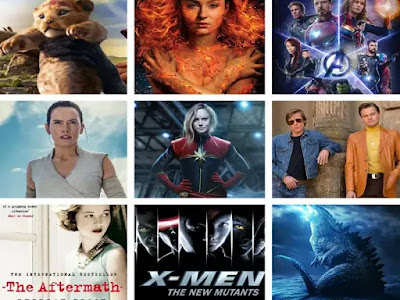 The plot is unknown.

The conclusion of the ‘Star Wars’ sequel trilogy.

CGI re-imagining of the 1994 Disney classic.

Carol Danvers becomes one of the universe’s most powerful heroes when Earth is caught in the middle of a galactic war between two alien races.

When a new toy called “Forky” joins Woody and the gang, a road trip alongside old and new friends reveals how big the world can be for a toy.

Peter Parker and his friends go on summer vacation to Europe and where Peter finds himself trying to save his friends against a villain known as Mysterio.

When Hiccup discovers Toothless isn’t the only Night Fury, he must seek “The Hidden World”, a secret Dragon Utopia before a hired tyrant named Grimmel finds it first.

A young elephant, whose oversized ears enable him to fly, helps save a struggling circus, but when the circus plans a new venture, Dumbo and his friends discover dark secrets beneath its shiny veneer.

The crypto-zoological agency Monarch faces off against a battery of god-sized monsters, including the mighty Godzilla, who collides with Mothra, Rodan, and his ultimate nemesis, the three-headed King Ghidorah.

A live-action retelling of the 1992 Disney film of the same name.

Elsa, Anna, Kristoff and Olaf are going far in the forest to know the truth about an ancient mystery of their kingdom.

Based on the graphic novels by Mike Mignola, Hellboy, caught between the worlds of the supernatural and human, battles an ancient sorceress bent on revenge.

We all have a superhero inside us, it just takes a bit of magic to bring it out. In Billy Batson’s case, by shouting out one word – SHAZAM! – this streetwise 14-year-old foster kid can turn into the adult superhero Shazam.

It’s been five years since everything was awesome and the citizens are facing a huge new threat: LEGO DUPLO® invaders from outer space, wrecking everything faster than they can rebuild.

Twenty-seven years later, the Losers Club have grown up and moved away, until a devastating phone call brings them back.

Pilot Amelia Wren and scientist James Glaisher find themselves in an epic fight for survival while attempting to make discoveries in a hot air balloon.

Ten years after her happily ever after, Giselle questions her happiness, inadvertently turning the lives of those in the real world and Andalasia upside down in the process.

Jean Grey begins to develop incredible powers that corrupt and turn her into a Dark Phoenix. Now the X-Men will have to decide if the life of a team member is worth more than all the people living in the world.

The Men in Black have always protected the Earth from the scum of the universe. In this new adventure, they tackle their biggest threat to date: a mole in the Men in Black organization.

Five young mutants, just discovering their abilities while held in a secret facility against their will, fight to escape their past sins and save themselves.

Mr. Link recruits explorer Sir Lionel Frost to help find his long-lost relatives in the fabled valley of Shangri-La. Along with adventurer Adelina Fortnight, this trio of explorers travel the world to help their new friend.

A young boy in Hitler’s army finds out his mother is hiding a Jewish boy in their home.

A dystopian world where there are no women and all living creatures can hear each others’ thoughts in a stream of images, words, and sounds called Noise.

A failed stand-up comedian is driven insane and becomes a psychopathic murderer.

After her anxiety-ridden mother disappears, 15-year-old Bee does everything she can to track her down, discovering her troubled past in the process.

Columbus, Tallahasse, Wichita, and Little Rock move to the American heartland as they face off against evolved zombies, fellow survivors, and the growing pains of the snarky makeshift family.

The third installment of the ‘John Wick’ series.

Travis Mills, a soldier in Afghanistan loses his four limbs four days before his 25th birthday, and when he returns home must reconcile with his step-father, and live with only prosthetics for his arms and legs.

A faded TV actor and his stunt double embark on an odyssey to make a name for themselves in the film industry during the Helter Skelter reign of terror in 1969 Los Angeles.

Live-action adaptation of J.M. Barrie’s classic tale of a boy who wouldn’t grow up and recruits three young siblings in London to join him on a magical adventure to the enchanted Neverland island.

An animated version of Charles Addams’ series of cartoons about a peculiar, ghoulish family.

36. The Passion of the Christ: Resurrection

The plot kept under wraps. Described as a sequel to the 2004 film, ‘The Passion of the Christ.’

Four sisters come of age in America in the aftermath of the Civil War.

The new Spawn movie will be a R-rated supernatural horror film.

An action-packed story of one young woman’s journey to discover the truth of who she is and her fight to change the world.

A financial reporter travels to Rio de Janeiro to visit a wealthy friend, only to get sucked into a plot to fake his friend’s death.

5 Factors to Consider When Choosing an Outdoor Movie Screen Rental

These Are the Essential Drummer Accessories You Need

6 Educational TV Shows That You Kids Will Actually Love